In September 1938, the SS command of the Reich acquired 20 km. in the south-east of Hamburg in the “Vier und Marschlanden” region, a brick factory, which has not been exploited for years, as well as the surrounding land, with a total area of more than 50 hectares, because “in this place, the land is of very good quality”. The surrounding marshland was rich in clay deposits which were to be excavated by the prisoners and fired in the kilns of the brick factory. The marshland was extremely unhealthy because the winters were cold and damp from the prevailing northern and eastern winds and the summers are unbearably hot.

In September 1938, the Reich SS Kommandant Oswald Pohl commandeered the Neuengamme brickworks, which had been redundant for many years, and the surrounding marsh of more than 500, 000 spare meters. He explained that the SS intended to “produce cheap, first quality brick by setting to work all that lazy lot who are in our concentration camps”. The production of bricks would help realise part of the large-scale architectural projects being proposed by Germany at that time. The banks of the Elbe were to redesigned and Hamburg was meant to become “an open door on the world”, a window for Nazi realisations. SS.

On December 13th 1938, the SS transfer a work detachment of a hundred men, referred to as “professional criminals” from kommando  camp de Sachsenhausen. to Neuengamme. Their job is to put the old brickworks back into operation and build a new concerntration camp on the site of the marshland to house the workforce. They also make a canal in the nearby bend of the River Elbe, thus giving access to barges for carrying goods between Neuengamme and Hamburg. In 1944, two large twostoried brick buildings are erected in order to house more prisoners.

The production of the brickyard will contribute to the realization of part of the great architectural program which serves as propaganda for the regime. There are plans to redevelop the banks of the Elbe in Hamburg, intended to become “a gateway to the world”, a showcase of Nazi achievements.

The steps of the construction

On June 4th 1940, a telegram from the Reich’s Security Central Service (RSHA)  announces to all Gestapo departments that from  now on Neuengamme Concentration Camp was an independent institution, Konzentrationslager Neuengamme, directly dependent on the concentration camps inspection.

From 1939 until 1945, the slave labourers were set to work in Kommandos within the camp area, to be known as Industriehof, Klinkerwerke, Brickworks, Elbe I, Elbe II, Jastram, Messap, DAW, Metallwerke. The Satellite camps. From 1942 to 1945, 80 satellite camps (established on a territory of hundreds of square miles and often far away from the main camp) are created, 20 of which were intended for women.   (Kommandos)

The French arrived in large numbers from 1944.

From the beginning of April 1945, the central camp was evacuated during the “death marches” and deadly transport to places of death or to the Baltic Sea (Lübeck) 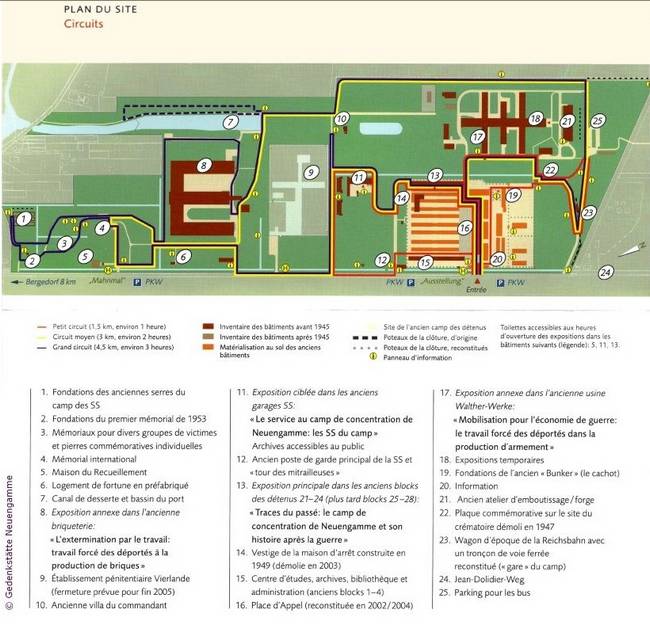