Activities of the Association

Organization  of the annual pilgrimage to the Neuengamme camp site, the High Places of the Deportation and certain Kommandos. 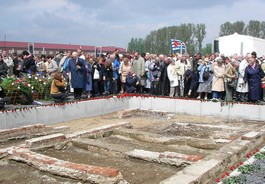 Pilgrimage in 2005 deposit of roses at the Bunker

Organization of a National Congress every two years, alternating with a gathering during which the General Assembly takes place. 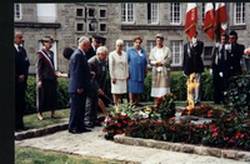 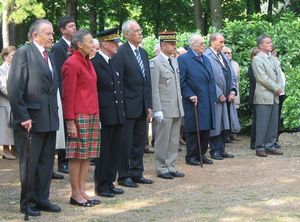 2008 – Lyon Congress. The officials attended the ceremony at the Memorial of the Ile aux Cygnes © AANG

In 2004  Publication of the quarterly bulletin “N’Oublions Jamais”.

The Association published, in 1995, the “Memorial of the French and French women deported to the Neuengamme concentration camp”, in partnership with the “Foundation for the Memory of the Deportation”. Nearly 10,000 names have been listed and classified, with: date and place of birth – serial number – date of arrival at camp – name of outside Kommandos if applicable – situation at liberation – possibly, if deceased before release, date and place of death (if known). The book is now out of print, but the Association can provide information.. 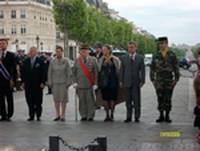 The president of the Amicale de Neuengamme alongside Ms. Simone Veil during a ceremony at the Arc de Triomphe © AANG

Within the Association, former satellite camps groups and regional groupes organise meetings. Former prisoners visit schools and help organise the “The National School Competition on the French Resistance and Deportation. Some régions offer a trip to Neuengamme to the winners and their teachers.

The “History Commission” took the “Memory and History” at the 2004 convention This commission conducts research on everything about the camp and the prisoners, it gathers and explores archives and documents. She was responsible for the development of the Memorial Neuengamme and writing the book “Neuengamme Nazi concentration camp”.

The Commission “Future of the Association” was established in 2004 at St. Malo Congress to prepare a path for the future. The commission is made up of a few former prisoners, children and grand children of prisoners along withe some friends who keep its spirit alive. It looks after forging links withe associations at European level, drafting documents to ensure that the Association is known and to create and maintain a website.

During the 2009 General Assembly, the two commissions merged and became the “Memory, History and Future” Commission of the Amicale de Neuengamme”.

In 2010, the Commission “Memory, History and Future” wrote a “Manifeste” of the Amicale de Neuengamme which was adopted by the Board Counsel  and published in “Let us Never Forget ” “N’Oublions Jamais” (April 2010).