The SS continues mercantile goals and manages dozens of entreprises.Les prisoners are employed in workshops installed in the camp enclosure or external factories and construction sites, according to the demands. They are grouped together by Kommandos (more than 80, including twenty reserved for women), in Hamburg and in the north-west of Germany. 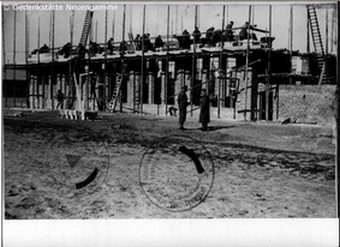 In 1942 comes a deep modification in the structure of the camps . It can be better described than by this expression of the German Minister of Justice Thierack reporting on a conference he had held with Goebbels:“Vernichtung durch arbeit” (extermination by work).

On April 30, 1942, Oswald Pohl, head of the Central Economic and Administrative Office of the SS wrote to Himmler: “The war has obviously changed the structure of the concentration camps and fundamentally altered their tasks with regard to the use of prisoners.

Guarding of detainees , for the reasons of safety, correction or preventionalone, is no longer a primary concern. The centre of gravity has now moved to the economic side. It is necessary to mobilize the work force that is held primarily for the tasks of war.

According to Pohl : « the commander of the camp is solely responsible for the work carried out by the workers, and this work must be, in the true sense of the word, exhausting, in order to achieve maximum output . The working time is not limited, the duration depends on the organization of work in the camp and is determined by the camp commander alone  …

Anything that might shorten the working time (meal times, calls, etc…) must be reduced to the strict minimum. Travelling and lunch breaks, of any duration, for the sole purpose of having a meal, are prohibited. »

This free labor, renewable and interchangeable serves Nazi war economy: arms factories, production equipment, building a submarine base, shipbuilding and repairs, chemical plants and oil refineries , military fortifications, clearance works, mine clearance, digging anti-tank ditches, etc.The prisoners are slaves in the service of “the master race”, for whom they have to work to exhaustion.

From 1939 until 1945, the free labor of prisoners is used in working Kommandos inside the enclosure of the Camp: Industriehof, Klinkerwerke (brickyard), Elbe I, Elbe II, Jastram , Messap, DAW, Metallwerke 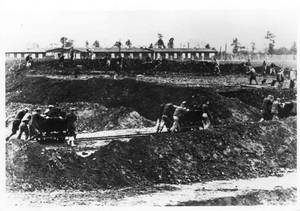 In the clay pits, the deportees push wagons filled with clay which will be transformed into bricks for the constructions of Hamburg © AKZNG

“Those of the “intellectuals” who did not speak German, being properly good for nothing, found themselves attached to hard labor, employed as laborers on the “terrace”. They pushed the loaded wagons onto the rails, unloaded the rubble from the barges, carried the bricks to the masons who were building a prison, a factory and a new larger crematorium, the daily consumption of the dead increasing steadily.”

From 1942, on the orders of the economic administration office of the SS (WVHA), creation of the first working kommandos outside the camp, but dependent on it. There will be up to 80 outdoor Kommandos, spread over an area of several hundred km2 and often very far from the Central Camp .