, , On May 4th 2005, the reorganised concentration camp site was inaugurated in the presence of the Hamburg Senate représentatives. Mr Ole Von Beust, Lord Mayor of Hamburg, Mrs Christina Weiss, Federal Government Commissioner for Cultural and Media Affairs.  Monsieur Robert PINCON, president of the Amicale Internationale of Neuengamme addressed those gathered to witness the inauguration including many members of the Belgian, Danish, French, Hungarian, Polish, Russian, Slovenian Amicales.

“…We, the “Häftlinge”, the first Europeans in this camp, will maintain our belief in mankind, in reasoned tolerance so as not to hurt others […] We want to be messengers of Peace, everyone will have understood this, but also of hope, seeing at our side younger generations determined to ensure that our respective national Friendships and therefore the International Friendship do not disappear….”. 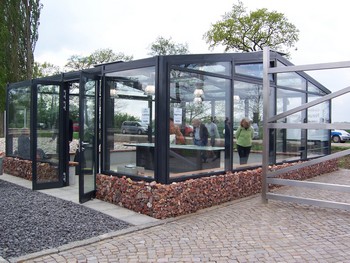 Located on the site of the camp, this new Deportation Museum proposes exhibitions set up in the original premises (brickworks, Walther-Werke factory, SS garages, etc.).

The restructured camp becomes a museum of the Deportation

The Parade ground has been restored to its original shape and aspect. The location of the prisoners’ huts has been marked by metal structures filled with broken stoners and bricks. The two brick buildings, built by the prisoners, contain the Camp Memorial offices, the research centre and part of the exhibitions.. On the grounds of the camp, the New Museum of Deportation offers different exhibitions shown in the original building comprising the Brickworks, Walter factories and SS garages, etc.. of the camp. The exhibitions are displayed in original brick buildings erected in 1943-1944 to house the former prisoners. The exhibition commentary is written in four languages, French, English, German, and Russian and is divided into three main themes.

– Traces from the past: the Neuengamme concentration camp from 1938 to 1945 and its post-war history (Main exhibition in the brick building at the end of the Place d’Appel – former prisoners’ blocks – erected in 1943/44).

– Mobilization for the economy: forced labour in the camp in the production of military armaments (accompanying exhibition in the former Walther-Werke armaments factory)..

– Extermination through labour: forced labour in the camp in brick production. (Side exhibition in the former brickworks).

A trilingual catalogue (German, English, French) of the exhibitions contains most of the texts and a large selection of illustrations (240 pages). Films are presented in the 38 video terminals. A digital model and 8 computer stations allow research on the victims and the historical sites.
The brick building at the entrance of the camp houses the study and research centre, the archives, the library and the administration. In 2005, many deportees came to the pilgrimage to commemorate the 60th anniversary of the liberation of the camps and to visit the new exhibitions in the restructured camp.

October 18th, 2006: Under the chairmanship of the Senator for Justice of the Free and Hanseatic City of Hamburg, the destruction of the last prison still occupying the site of the camp began. The work was completed in early 2007.
Development projects can then begin, including :
– reconstruction of the railway track from the station to the port,
– reconstitution of a cauldron with Decauville tracks, wagons;

In a second phase, other projects will be implemented:
– an exhibition on the concentrated workforce in the armaments industry,
– making a documentary film,
– additional information for current exhibitions,
– videos in several languages.
etc. 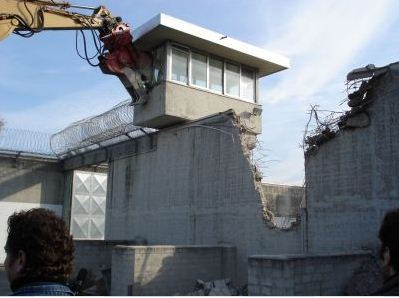 As planned since 2003, responsibility for the Camp site, now completely freed from the last prison, is being transferred from the Ministry of Justice to the Ministry of Culture.
On Saturday 19 May 2007, an official ceremony marked this change of assignment. A cauldron was reconstructed and panels, placed on a wall of the former prison, left in place as a witness to the prison occupation, were unveiled by Mrs Karin von Welk, Hamburg’s Minister of Culture, Mr Carsten Lüdeman, Minister of Justice, Detlef Garbe, Director of the Gedenkstätte, and Robert Pinçon, President of the Amicale Internationale de Neuengamme, in the presence of a large audience.