the Amicale of Neuengamme

Neuengamme camp, created in 1938 in the suburbs of Hamburg, is the biggest concentration camp in North-western Germany. The prisoners were working in the main camp as well as in satellite camps. There were 84 of those satellite camps in which the number of prisoners could go from about a few tens up to more than a thousand. Overall, more than 100 000 prisoners from 28 nationalities were sent to Neuengamme – about 11 000 of them were French (among them more than 700 women).

Neuengamme camp shares a number of characteristics with the other concentration camps. To the forced labour and lack of food, which were meant to shorten a prisoner’s life down to about 9 months, were added the will of dehumanization, all kinds of arbitrary and brutal treatments, summary executions, endless roll calls and the tragic evacuations during the last weeks of the war (the Death Marches). Our fellow-countrymen did not escape those trials and payed a heavy tribute to Nazi barbarity as nearly two thirds of them perished in Neuengamme or its satellite camps, particularly during the evacuations.

Since all the prisoners of the camp had been evacuated by the SS before the arrival of the British troops, the camp could not be “liberated” and therefore it remains one of the most unknown among the Nazi camps. And yet, more than 7 000 prisoners died in the Bay of Lübeck on May 3rd 1945, when the Royal Air Force bombed two ships where they had been loaded by the Nazis: it was probably the biggest maritime tragedy in history.

Just after the Second World War, a handful of prisoners created the Amicale in order to help one another, to help their friends’ families and to keep alive the memory of those who had disappeared and the memory of deportation. They wrote a “Pledge to our Fellow Prisoners”, which states the basis for their commitment. 65 years later, the Amicale de Neuengamme still includes a few survivors and mainly descendants and members who share the same values which they have reaffirmed and updated in a “Manifesto” adopted in 2010.

This new website, opened on May 3rd 2020, anniversary of the tragedy of the Bay of Lübeck, offers a lot of information on life conditions in Neuengamme, or rather survival and death conditions for the French prisoners. It comes after the first website, created in 2006, which had become outdated.

Its organisers have taken great care to include a maximum of information or testimonies, thus enabling the visitors to get a view of the prisoners’ fate as precisely as possible.

We are all the more interested in receiving your commentaries as they will, eventually, enable us to correct any error you might find out.

Finally, on this new site you will have the possibility to consult the “Memorial”, a database storing the names of more than 9 700 Neuengamme French prisoners, with all the information known about their detention time. This document is the result of a long research-work which the survivors started more than 30 years ago and which is still being permanently updated by a group of descendants.

I hope this site will fully meet your expectations

President of the Amicale de Neuengamme 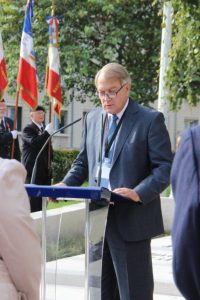