The memorial of Bullenhuser Damm

Exhibition in memory of the 20 Jewish children murdered on the night of April 20th, 1945. 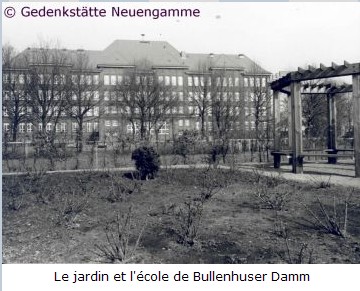 The Bullenhuser Damm school is located in the city of Hamburg. From October 1, 1944, it housed a kommando outside the Neuengamme camp: clearing, searching for unexploded bombs, recovering materials for the firm Deutsche Erd und Steinwerke.

The SS doctor Kurt Heissmeyer was authorized by Heinrich Himmler to carry out medical experiments on deportees from the Neuengamme camp to treat tuberculosis.

These experiments were first carried out on adult deportees in a special barracks where, apart from the victims, only a German nurse and two French deportees, Professor Gabriel Florence and Dr. René Quenouille, were allowed to enter, under penalty of death, to assist.

20 Jewish children (10 boys and 10 girls), aged between 5 and 12, are transferred from Auschwitz to the Neuengamme camp to be tested by Heissmeyer’ s medical experiments. Among them were two French children:
Georges- André Kohn (12 years old)
Jacqueline Morgenstern (12 years old).
Professor Florence, Doctor Quenouille and two Dutch nurses are in charge of taking care of the children.

Heissmeyer inoculated the tuberculosis bacillus into the 20 child-cobayes. In mid-January 1945, he removed their lymph glands and took photographs of the scars.

– HAMBOURG.  Bullenhuser Damm’ School
On 20 April, as English troops approached, orders were given, on instructions from Berlin, that the children were to be made to disappear.

During the night, they were transferred from Neuengamme to Bullenhuser Damm, whose Kommando was evacuated on April, 11th.

The 20 children were hanged in the early morning in the basement of the school, along with the two French doctors and the two Dutch nurses. Soviet prisoners suffered the same fate.

A rosery behind the school is dedicated to these 20 young martyrs.

The participants in this massacre were:

==>The others were tried at the Curio Haus trial in Hamburg, sentenced to death and executed on October, 8th 1946.